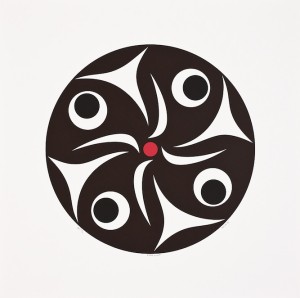 In the spirit of spindle whorls, this contemporary Coast Salish design depicts four salmon heads in a circle. The middle point in this design symbolizes the artistic void in Coast Salish art which has been filled by the work of Susan Point. The salmon heads and spindle whorl symbolize cultural perpetuation, while the middle point symbolizes the strong role that Susan Point has played in inspiring and influencing a younger generation of contemporary Coast Salish artists. In the disCOURSE and writing on Coast Salish art, one will often still find subtle biases towards northern and Wakashan art forms of the Northwest Coast. Fortunately, such biases are beginning to change, and Susan Point has been vital to a relatively recent appreciation for Coast Salish art.   This design was actually inspiRED (the gap that was filled) by a multi-media wood, paint, and glass panel created by Susan Point. I had the personal pleasure of perceiving and being inspiRED (the gap that was filled) by that piece on a visit to Spirit Wrestler Gallery.

lessLIE, or Leslie Robert Sam (born 1973) is a Coast Salish artist from Duncan, BC. This highly talented and original artist works in multi-media, but particularly enjoys dealing with serigraphs. As a graduate student at the University of Victoria, he studied conventional Coast Salish art. The artist draws on traditional iconographic elements, while inventively intertwining his art with contemporary texts.