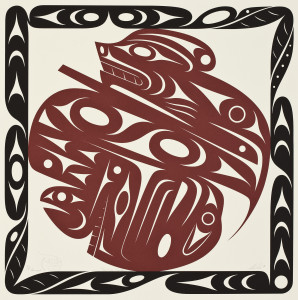 This is John Marston’s first serigraph. He, like his brother Luke Marston (see Luke’s serigraph Thunderbird and Killerwhale), is primarily a carver.

John Marston (Qap’u’luq) (b. 1978), Coast Salish, is a carver from Ladysmith, British Columbia. His parents David and Jane Marston, both carvers, were his first teachers and John picked up a carving knife at the age of eight.

John was mentored by the late Coast Salish carver Simon Charlie who taught him the legends of the Coast Salish people. In his early twenties, John immersed himself in carving and joined his brother Luke at the Thunderbird Park at the Royal British Columbia Museum in Victoria. During the first four years, he volunteered his services, earning the resident carver position for the fifth year of his stay. In this last year, he refined his artwork alongside talented Northwest Coast carvers such as Silas Coon, Shawn Karpes, Gary Peterson and Wayne Young.

John’s work is part of public and private collections worldwide and is exhibited at the Museum of Anthropology in Vancouver, at the Vancouver International Airport and the Vancouver Convention Centre.