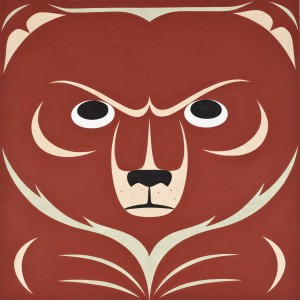 This design was commissioned by the owners of the Salish Weave Collection.

The man’s look and demeanour are sometimes associated with that of a grizzly bear and the owners wanted a design that would reflect that. This is my interpretation; it has a realistic style as opposed to having the traditional crescents and trigons.

Maynard Johnny Jr. (born 1973) has inherited a unique blend of traditions as he is of both Kwakwaka’wakw and Coast Salish decent. He is self-taught, and has been working on his art since his teens. While versatile in other medias, including woodcarving and engraving, Johnny has focused on printmaking for the past decade. He tries maintain a contemporary vision of traditional legends. Johnny currently lives in Chemainus, British Columbia.