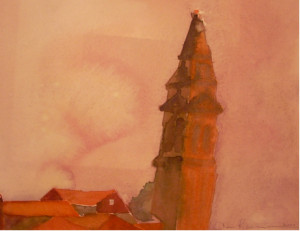 An exhibition of works by University of Victoria alumna Avis Rasmussen. His paintings were inspired by a trip to Italy and include Venice, Umbria, and Tuscany.

Avis Rasmussen is a renowned coastal painter. She developed his fascination with exploring and expressing the concepts of the island environment during travels in Greece, Denmark, England, California and the Maritimes.

She completed a Bachelor of Fine Arts at the University of Victoria in 1979. Three years later, Rasmussen graduated from the University’s Masters in Art Education program, and has worked throughout the province of British Columbia. A celebrated poet and printmaker, Rasmussen is a strong advocate for Victoria’s arts community. Through participation in various organizations, as well as the guidance she provides for a younger generation of artists, Rasmussen is regarded as a figure of national, and international renown. Her unique approach to colour and light reflect her personal reflection upon home and garden, as well as her dedication to image and form. Rasmussen has garnered many accolades in her artistic career, and her pieces have been featured and collected worldwide.