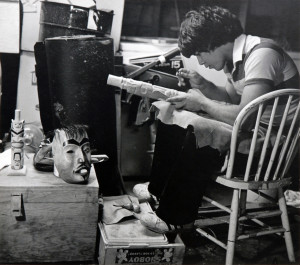 This exhibit showcased a selection of photographs from the book Indian Artist at Work (1977) by Ulli Steltzer. The photos were displayed at both the University of Victoria and the Universidad Veracruzana in Xalapa, Mexico. The exhibit showed this photographs as a teaching collection of Dr. Steltzer’s work in the 1970s and offers a glimpse of the inspirational artistic activities and interests of some of the Indigenous people in British Columbia.

About the photographer: Born in Frankfurt, Germany, Ulli Steltzer emigrated to the United States to teach music. Later she was asked by the New Jersey Department of and Industry to document conditions of migrant workers, and thus began her career of photography. After years in Chicago, Atlanta and the southwest United States she moved to Vancouver in 1972. While she captured many Native peoples here in Canada, she has also found time to study the Mayans in Guatemala, the Naxi of Yunnan Province in China, and the New Immigrants of California.