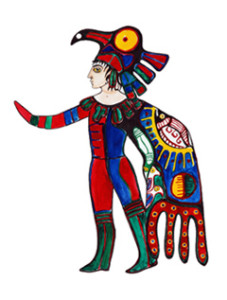 Mary Kerr, illustration of a costume designed for Copper Thunderbird

Artists mediate realities and bridge worlds. The shaman lives in two or more inter-visible worlds and functions traditionally as the go-between to bring back what he sees to make art and transform the world. The stage artist has to bridge the stage world to the audience. We were looking for a stage environment that would be a container for Norval’s Shaman and artist consciousness and Marie Clement’s script. We needed a theatrical world in it’s own right and not an illustration of his paintings or a documentary of his life. I envisioned the stage design as representing the interior of Norval’s mind, where everything in the play, all the events, real and imaginary, were seen through the shifting shapes and colours of shamanistic consciousness.