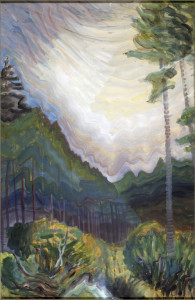 In Her Own Words Catalogue

This exhibition explores the artistic visions and words, both spoken and written, of three of Victoria’s best-known artists of the 20th century: Emily Carr, Katharine Maltwood, and Myfanwy Pavelic. While their artistic expression led them along different trajectories each as a painter, sculptor and portraitist, they also crossed paths in a number of instances as supporters of one another’s artistic pursuits, in their shared search for iconic imagery from the point of view of artists on the West Coast of Canada and in their exploration of both modern and traditional means of expression.