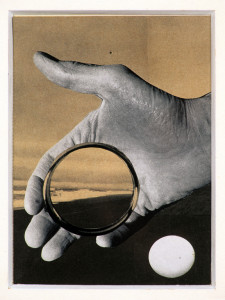 Robin Skelton was born on October 12, 1925, in Yorkshire, and after his R.A.F. service, took a degree in English Language and Literature at the University of Leeds. He taught at the University of Manchester from 1951 to 1963. He began making collages in 1956 and exhibited regularly with the Peterloo Group. He came to the University of Victoria in 1973 and became the founding Chairman of the Department of Creative Writing. He was also the editor for the Malahat Review. During the 1970s, he exhibited his collages with the Limners group and in travelling exhibitions.