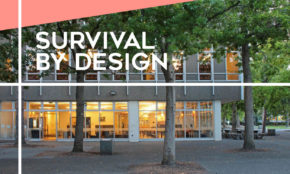 The Legacy of Early Modern architecture in Victoria

Survival by Design: The Legacy of Early Modern architecture in Victoria in the Urban Landscape

Survival by Design: The Legacy of Early Modern architecture in Victoria: the UVic Gordon Head Campus

The two decades post-WWII saw some of the most intensive urban development Victoria has witnessed. The result, a flowering of design innovation by a small group of architectural, has created a built heritage which, still under appreciated, nevertheless still defines the look and feel of Victoria.

Initiatives such as Centennial Square and the UVic Gordon Head Campus, planned neighbourhoods to accommodate returning veterans, to commercial and residential high-rises, this “legacy”; building stock still defines the urban landscape, influences how we use it, and to a large part determines how we adapt and change it.

These two exhibits document this unique and creative architectural legacy, captured through the lens of architectural photographer, John Taylor.

As small group of local architectural practices, often working together, created a distinctive design approach to style and form, but working within the earlier 20th tradition of the European-influenced “International Style”. As regional influences coalesced, what we know today as a “West Coast Style” emerged.

Form and detail uniquely expressed not only the purpose and function of these buildings, along with climate, geography and materials availability, but also demonstrated how building traditions of the region were subsumed in new construction technologies.

Taylors’s images document adaption and change in the urban landscape as original designs have responded to the pressures architectural life cycles: changes in purpose, retrofits to meet modern life-safety and other codes, additions to accommodate growth. Archival evidence, drawing from plans, photographs and textual records, traces the original design intent of the builders. Some of the reasons and subsequent design approaches for both structural and cosmetic adjustments to built form and detail are also revealed.

This exhibition project is supported by a grant from the Canada Council of the Arts.

Survival by Design: the Legacy of Early Modern Architecture in Victoria

Join us for a lecture with guest curator Martin Segger. Survival by Design: the Legacy of Early Modern Architecture in Victoria Prof. Martin Segger’s talk will focus on a series of iconic Victoria buildings which defined a new urban landscape in the 1950s and 6Os. Illustrated by contemporary photographs by John Taylor and supplemented by textual and visual sources from the Architectural Archives of the Pacific Northwest at UVic, Prof. Segger explores the design origins and traditions represented by this much-neglected part of the City’s architectural heritage and examines the process of adaptation and change which has either enhanced or compromised the design intent which prompted their original construction.