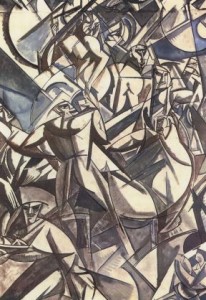 Wyndham Lewis, The Creditors. Design from the portfolio of Timon of Athens, 1912, published 1913..

The Lion and the Fox – Catalogue

The Lion and the Fox exhibition showcases the Lewis side of the C.J. Fox Collection. It is not only representative of the largest and perhaps most significant portion of the whole assemblage, being the foundation upon which the remaining collection was built, it also features the striking visual art of Lewis and others, making it particularly suitable for exhibition purposes.

The University of Victoria Libraries, the Friends of UVic Libraries and the Maltwood Art Museum & Gallery are pleased to present an exhibition of the C. J. Fox Collection of Wyndham Lewis art and literary works. The public showing celebrates former Reuters/Canadian Press journalist and Modernist scholar Cyril Fox’s donation of his extensive English Modernism collection to the University of Victoria. The Lion and the Fox comprises two exhibits; the McPherson Gallery exhibit of art works by Wyndham Lewis and others, and a display of Wyndham Lewis books and materials from the Cyril James Fox fonds, held in the Archives and Special Collections Reading Room (A005). 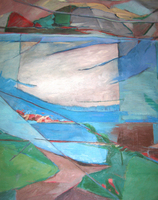 Cameron Ian MacLeod was the student of such talented painters as Jack Shadbolt, Gordon A. Smith, and Takao Tanabe, until his life was cut short at the age of 25. The exhibit features work by the young artist, along with his three mentors’ paintings.

At the age of three MacLeod experienced a traumatic episode where he underwent open heart surgery. This experience seems to be played out and explored particularly in his later work, which includes open torsos, human & fish skeletons, swirls & spirals of energy, ladders climbing skyward, and crucifixion images.  He produced the main body of his work between 1975 and 1981. During these years he received scholarships and awards, studied in Canada and abroad, and participated in several exhibitions. He also graduated with an Honours B.A. in Fine Arts from the University of British Columbia.

His earliest series of landscapes and graveyards was influenced by the Group of Seven, Emily Carr and his time in the Queen Charlotte Islands. A second period in his work saw an explosion of colour featuring representational  fractured landscapes and Native Teepees, influenced by the Fauve School, as well as Gordon Smith, Allen Jones and Alan Wood, who instructed him in Banff.

During and after his travels in France and England Cameron started creating delicate but vigorous landscapes, influenced by Cezanne and Van Gogh. His most powerful period incorporated his final figurative works; charcoals and oils in black and white, somewhat Baconesque and also influenced by Giacometti. This final series captured his inescapable journey inward, from which he did not return.

His friend and mentor Jack Shadbolt wrote of Cameron in a 1987 essay, “Every once in a rare while one is confronted with an aspiring young artist who is charged with such passionate dreams and has evidence of such genius vision, though as yet chaotic and unfocused yet so fraught with unusual promise, and yet who is so distressingly fragile in his own psychic uncertainties, that he compels one’s compassion by the very precariousness of his potential self-realization: such a young artist was Cameron MacLeod.”

Cameron MacLeod did a great deal of work in a very short time. And though his life was brief, like a flame he burned brightly, leaving to us as his legacy this powerful body of work. Cameron died in 1983 of heart failure. 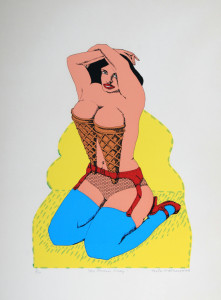 The exhibit’s “parallel visions” theme focuses on three main ideas: First, both Pop and Op art reacted to and expanded upon Abstract Expressionism, the dominant art movement of the 1940s and 50s. Second, while Pop and Op may at first glance seem vastly different in their focus, development, and impact, subtle connections exist between many of the works featured in this exhibition. Third, Pop in particular was one of the major movements of the twentieth century and continues to exert a considerable influence on art, as seen in the works of the selected West Coast Canadian artists shown here.

Over 50 works, including painting, prints, collage, sculpture, film, and archival ephemera are showcased in their exhibition.

This exhibit features the paintings of Wade Stout and his unique representations of Shakespeare’s Macbeth from an artist’s viewpoint. Combining classical drama, Tarot, mythology and the culture of the early 17th century with modern symbolism, he recreates an accessible Shakespeare that spans layers of meaning and media.

Stout explores three layers of meaning by Shakespeare: concept, character and plot. The background allegory of Macbeth is a war within families, making references to biblical stories such as King Saul and King David. We sympathize with this anti-hero while he loses the battle for his soul.