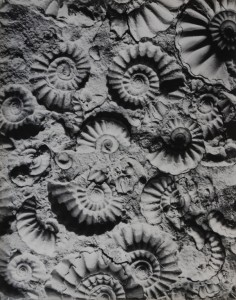 An exhibit of 30 photographs by David Baird with accompanying poetry. Beauty in the Rocks is comprised of select images from Baird’s years of world travel as a record of his research. Dr. David Baird’s contribution to geology includes mapping the geological history of Newfoundland, and founding the National Museum of Science and Technology in Ottawa.

Curated by Astri Wright, Professor in the Department of Art History, UVic

This was the first solo exhibition of photographs by Peter Paul Harnisch, a Vancouver-based European-decent Canadian artist. It featured 30 large photographs documenting his expressive response to post-spawned salmon in the same creek on the lower mainland over the last three years. It invesitaged the sacredness of place and spirit through the life cycle of salmon on the West Coast. The exhibition featured a single piece guest-installation by Washington State sculptor Ken Lundemo called “Salmon Woman”.

Harnisch began his photographic career in 1986. After a decade of work in the commercial photography he began to pursue the medium as a vehicle of personal, creative expression. The moment that caused Harnisch to make a conscious shift from commercial work to art was his experience, in fall 2003, of photographing salmon in a Vancouver creek after their run had come to an end. A selection of his photographs of dead salmon from 2003-05 in Scott Creek in Coquitlam BC was featured in the show.

This is the first of two exhibitions from the same team coming to Maltwood Art Gallery and Museum. The title, Dirge, refers to songs sung at funerals, associated with Christian and pre-Christian practices. This exhibit explores the first and last moments of our lives, the act of passing through the veil between the living and the dead, and the public and private spaces these events happen in. The exhibit reflected the funereal aspect of photographing the salmon only after they had spawened and died.

The Three Rivers exhibit features works by 11 artists, writers, journalists and photographers that embarked on three separate but simultaneous journeys along the Snake, the Wind, and the Bonnet Plume Rivers. All three rivers are a part of the Peel River Basin, the traditional territory of both the Nacho Nyak Dun and Tetlit Gwich’in First Nations. This remarkable project was orchestrated by CPAWS-Yukon (Canadian Parks and Wilderness Society) and took place over 18 days in August, 2004.

This was a presentation of the collaborative work of students, faculty and volunteer professionals who have been working under the direction of Dr. John Olseon (Greek and Roman Studies, University of Victoria) at the Humayma archaeological site in Jordan. This exhibit features historic artifacts and contemporary art forms as well as photography of the site and the relationships formed there. The photos were taken by Robbyn Gordon.

Humayama was on an ancient trade route and was occupied by the Roman military, then Byzantine Christian clergy, and then the Abbasids. 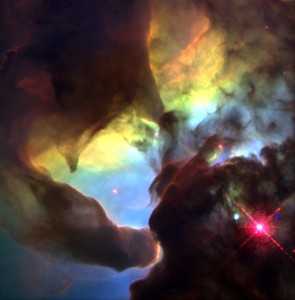 A. Cault and NASA, Interstellar Tornadoes

The Art of Physics online catalogue is available here. It features images from CERN, NASA, UVic and more.

The exhibition consists of a representative series of visually stunning images and movies, contributed by scientists including those at the University of Victoria — and by institutions from around the world, that reflects the physicists and astronomers efforts to render the unseen seen, from the immeasurably tiny quarks to the sheer mind-numbing immensity of the Universe in its entirety.

This was a multimedia installation of photographs by Amanda Koster, and documentary footage by filmmaker Sarah Tittlebaum. This exhibition was in conjunction with the Community Eating Disorder and Related Issues Counselling (CEDRIC) Centre.

This exhibition showcased the innate beauty of all women, regardless of age, race, ability or size. Amanda Koster is a documentary photographer based out of Seattle that photographed women from Vancouver Island for the project.

Curated by Grace Eiko Thomson, from the Nekkei National Museum and Cultural Centre

This exhibition looks back through a period of almost fifty years of history, through the eyes of Japanese Canadian studio photographers who operated in Cumberland, New Westminster, and Vancouver, BC. The studio images reveal subjects from a diversity of communities: European, Chinese, Japanese and African-American immigrants are all depicted, not the province’s lite and workers.

This project was funded by the Community-University Research Alliance.

A challenging series of new photographs by Robbyn Gordon. In this series Gordon focuses on innocuous subject matter such as houses, roads, and empty fields, which she photographs at night, often using time-lapse photography to enhance the extremes of darkness and light. This method also allows Gordon to explore the invisible aspects of these ordinary things by showing aspects of the scene that might not be visible in real time.

Gordon’s real talent lies in revealing the ordinary in its unfamiliar moments, asking viewers “to look at their own worlds in depth”.

A presentation of Wendy Ehlers rare black-and-white photographs of petroglyphs and rock formations from Writing-On-Stone Provincial Park and Archeological Preserve in southern Alberta.

Ehlers’s focus is not only on the pictographs and petroglyphs of Writting on Stone Park, but on stones themselves. Ehlers has said she strives to”isolate and preserve in photographic form of the dignity, elegance and mystery found within evocative stone structure.”

An exhibit featuring works completed by Dr. Syl Drabitt during his expedition to the North with the Canadian Goast Guard icebreaker Louis S. St. Laurent in 1994.

Dr. Syl Drabitt served as a surgeon on board the Canadian Coast Guard icebreaker Louis S. St. Laurent on the joint Canada/USA polar expedition in 1994. Dr. Drabbit was one of two artists on board who captured the spirit of the land and the expedition with paint, canvas and camera.

This was the result of an ambitious research project to create a travelling exhibit on the history of the university campus lands. The exhibit is a chronological study of the various occupants and uses of the land before it became a modern university campus in 1963.