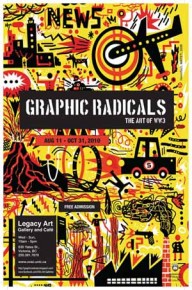 Graphic Radicals was a themed presentation of the work of World War 3 Illustrated, a New York artist collective, from the 1980s to the present day. The art confronted issues such as anti-war protests, squatting in New York, the tragedies of 9-11, racism, prisons and anarchism through a variety of mediums including posters, graphic illustrations, paintings, banners and other media.

Seats For Sale – Art For Show: The Meaning Behind Film Festival Posters is a special exhibition project conceived by The Victoria Film Museum Society and is scheduled to open in conjunction with The Victoria Independent Film and Video Festival. The exhibit features a collection of posters from different film festivals around the world.

The word “poster” is a familiar term in contemporary global society. Posters are important communication tools, from political outcry to commercial advertising. Posters also decorate our bedroom walls. They clutter up traffic light posts. They are sold and collected. They have a rich and extensive artistic history. The poster is a complex medium that wears many faces. The film festival, similarly, has a rich history. It is a significant cultural and artistic event that is celebrated around the world year after year. 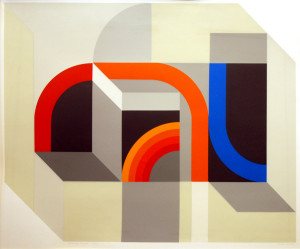 This was a retrospective of Gordon Smith’s work from 1950 to 1978. From Impressionism to hard-edge technique and pure colour field images, Gordon Smith has done it all. This exhibition documents his growth as an artist.

To view more of his works, visit our online inventory here and search “Gordon Smith.”

Gordon A. Smith was born June 18, 1919, in Hove, Sussex, England. In 1933, his family moved to Winnipeg, Manitoba. Smith’s artistic interest developed out of his father’s influence as a watercolourist. In 1937, he enrolled in the Winnipeg School of Art, where he studied with Lemoine Fitzgerald, however would eventually move to Vancouver with his wife Marion. With the advent of World War II Smith joined the Canadian Army in 1940, returning four years later to continue his education at the Vancouver School of Art. After completing his courses at the school in 1946, Smith joined the staff of teaching Graphics and Design for ten years. In 1956, he joined the Faculty of Education at the University of British Columbia where he taught art until his retirement in 1982.

Smith has exhibited throught Canada, as well as on the international art scene. His work is found in major art collections including the the Vancouver Art Gallery, the National Gallery of Canada, the Museum of Modern Art in New York, the Smithsonian Institute in Washington D.C., and in the Victoria and Albert Museum in London, England.

Throughout his career, Gordon Smith has received numerous awards and honours, including First Prize at the Biennial of Canadian Art in 1955, an Honourary Doctorate from Simon Fraser University in 1973, Professor Emeritus from the University of British Columbia in 1983 and an Honourary Doctorate from the Emily Carr College of Art and Design in 1995. In 1996 he was also awarded the Order of Canada for his significant contribution to Canadian culture. He is a member of the Royal Canadian Academy of Arts.