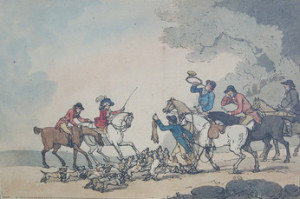 Sporting Art’s development was centred in England and for this reason is accepted as being “British.” The increased popularity of racing, fox hunting and shooting created a new niche for artists to fill. Naturalism is a theme found throughout this exhibition. These paintings are representations of social life, reverence for the landscape and portraiture.

The artists in this collection would have been aware of the great sporting artists of the 17th-19th centuries, and we can see their inspiration and influence from the grand portrayals of the mighty stallion standing proud and strong amidst the luminous landscape to the commotion and excitement of the fox hunt bringing forth to the public the beloved pastimes of 19th century England.

Dr. Sydney W. Jackman has been a History professor since 1964 and received an honorary degree by the University of Victoria in 1991. He has also been a life-long art collector. The University has benefitted from his generous donations, an extensive collection of blue and white Chinese porcelain and a large collection of English 18th and 19th century art. It is from the latter that this exhibition of “British sporting art” has been selected.