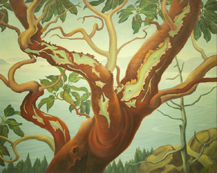 In conjunction with UVic’s 50th anniversary this exhibition, guest curated by former director Martin Segger, celebrates more than five decades of art at the University of Victoria.

The three founding components that underpin today’s University of Victoria Art Collection mark the stages in the institutional establishment of he University itself. The formal development of the Victoria College Art Collection was prompted by the amalgamation of the Victoria Normal School of Victoria College at the Lansdowne campus in 196. The commissioning of public art to enhance new buildings essentially began with construction on the Gordon Head Campus in 1961. The death of Katherine Emma Maltwood in 1961, just two years before issue of the University of Victoria’s letter patent, prompted her husband John to act on her wishes quickly and the Maltwood Art Gallery at Royal Oak passed into the hands of the University in 1964. Each initiative was to determine in its own way the future development of the University’s now 27,000 item art collection.  – Martin Segger (Director and Curator 1973-2011)