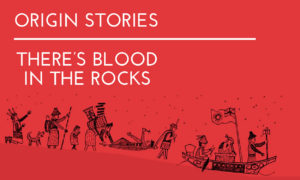 “Indigenous blood is in the very land itself.” Marianne Nicolson

Kwakwaka’wakw artist Marianne Nicolson uses pictographic imagery and song in a quiet but powerful video installation that tells the often silenced history of the 1862 small pox epidemic in Victoria which utterly devastated thousands of West Coast First Nations people. Nicolson acknowledges the loss of her ancestors while affirming continued Indigenous presence in the land and the strength, endurance and resurgence of First Nations peoples over time.

This video installation was shown in conjunction with the exhibition, Origin Stories: First Nations Prints and Carvings.

Engaging with Indigenous Legal Traditions through Stories and Art

The revitalization and recognition of Indigenous laws are essential to reconciliation in Canada. Indigenous art and stories play an important role in guiding this work as they not only depict cultural beliefs but also represent aspects of legal traditions.

Join Dr. Rebecca Johnson and Jessica Asch (LL.B) from the University of Victoria Faculty of Law as they share current research about Indigenous art and its relationship to law. During this program, the audience will engage critically with the art and stories in the current exhibition Origin Stories at Legacy Art Gallery Downtown.