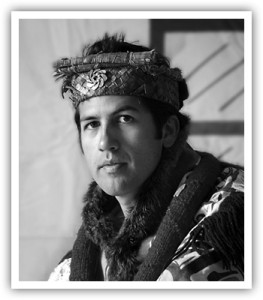 Andy holds a Master’s degree in Anthropology. Because the K’ómoks First Nation land lies between the larger Salish and Kwakwa̱ka̱’wakw territories, his thesis focused on notions and expressions of contemporary K’ómoks identity. His work in anthropology provided him with a background in linguistics which subsequently inspired him to create a company, Copper Canoe Inc, that specialized in the creation of Aboriginal language media.

Andy started his artistic career in 1990 when he designed and painted chilkat-style blankets for use in potlatch dancing. Andy creates contemporary bold and unique imagery that remains rooted in the traditions of his ancestors.

Andy performs traditional songs and ceremonial dances at potlatches. He is also a member of the Le-La-La, the Gwa’wina and the K’umugwe dance groups. 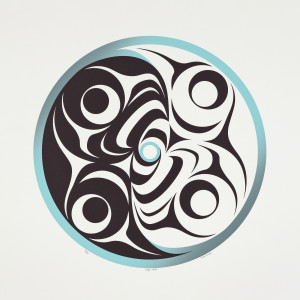