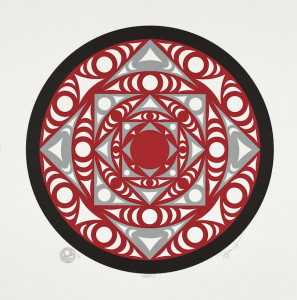 This is a Salish version of a contemporary mandala. The mandala originates in East Indian religions such as Buddhism and Hinduism. These geometric paintings represent the cosmos from a human perspective. They are used as meditation tools to grab the viewer’s attention and help him achieve deep states of meditation.

After seeing the beauty of Buddhist mandalas, I decided to do a Salish version. I enjoy doing cross-cultural art because art is one of the only practices that appears in all cultures known to man. Art is one of the things that makes us human and bridging different cultural art forms helps me feel the unity of mankind.