A letter written on Katharine Sapsworth’s engagement to John Maltwood in 1899 provides a window on her enduring pursuit of a life of “Beauty Absolute,” a phrase that echoes the principles of Arts and Crafts Movement founder William Morris. Popular in Britain in the late 19th and early 20th centuries, Morris and his circle perceived modern society to be in a state of spiritual crisis and moral decline due to industrialization, materialism and the loss of cultural traditions. Art, beauty, nature, and handmade objects were hailed as central to the rejuvenation of post-Industrial British society. The Maltwoods embraced these ideals and during their sixty years of marriage they shared a very idealized outlook on life. 1 In the letter, she wrote:

How delightful it is to feel borne upon one’s soul the divine law of harmony, which is neither more nor less than Beauty. Whatever subject you find me taking up will be to help in the study of that, the greatest of all sciences. A beautiful form is better than a beautiful face, beautiful behaviour is better than a beautiful form, for the last is the assurance of God within. If fate so orders that not only our lives but our souls shall blend in absolute harmony, we must never flag in our persuit [sic] of beauty absolute.  2

Katharine’s creative drive and artistic vision directed a large part of the Maltwood’s married life. Her formal artistic training at the Slade School of Art immersed her in the aesthetics of the “New Sculpture Movement” which emphasized naturalism and dynamism of the human figure and explored a wider range of subjects than the overtly didactic subjects of British sculptors of previous decades. While in Paris she also studied the sculptural work of Auguste Rodin. In all, she executed over eighteen sculptural works, some completed in stone or copper, others as plaster maquettes. By the 1920s her subject matter had moved to the exploration of more mystical themes. In particular Magna Mater (1910), Primeval Canada Rising to Her Destiny (1912), and The Sun of Righteousness (c. 1940), illustrate the spiritual and philosophical depth of her practice. By 1924 her work was celebrated in The Studio magazine, one of the foremost Arts and Crafts publications in circulation in Europe and North America. The article’s author stated, “English womanhood owes a debt to Mrs. Maltwood for her example of fearless originality.” 3

In the first example, Magna Mater, Maltwood references the universal and ancient worship of the Great Mother goddess, represented by the central crouching figure. Her feet are bound, and she is surrounded by a mass of humanity. The composition is framed by a temple-like structure, which critics of the time likened to Egyptian or Archaic architectural forms. The Biblical text on the piece reads “Great travail is created for every man from the day he goes out of his mother’s womb till the day he returns to the mother of all things.” 4 The inclusion of moralizing text is typical of a number of Maltwood’s pieces and was a trend popular with artists and designers of the time including William Morris, Dante Gabriel Rosetti, and Edward Burne- Jones. 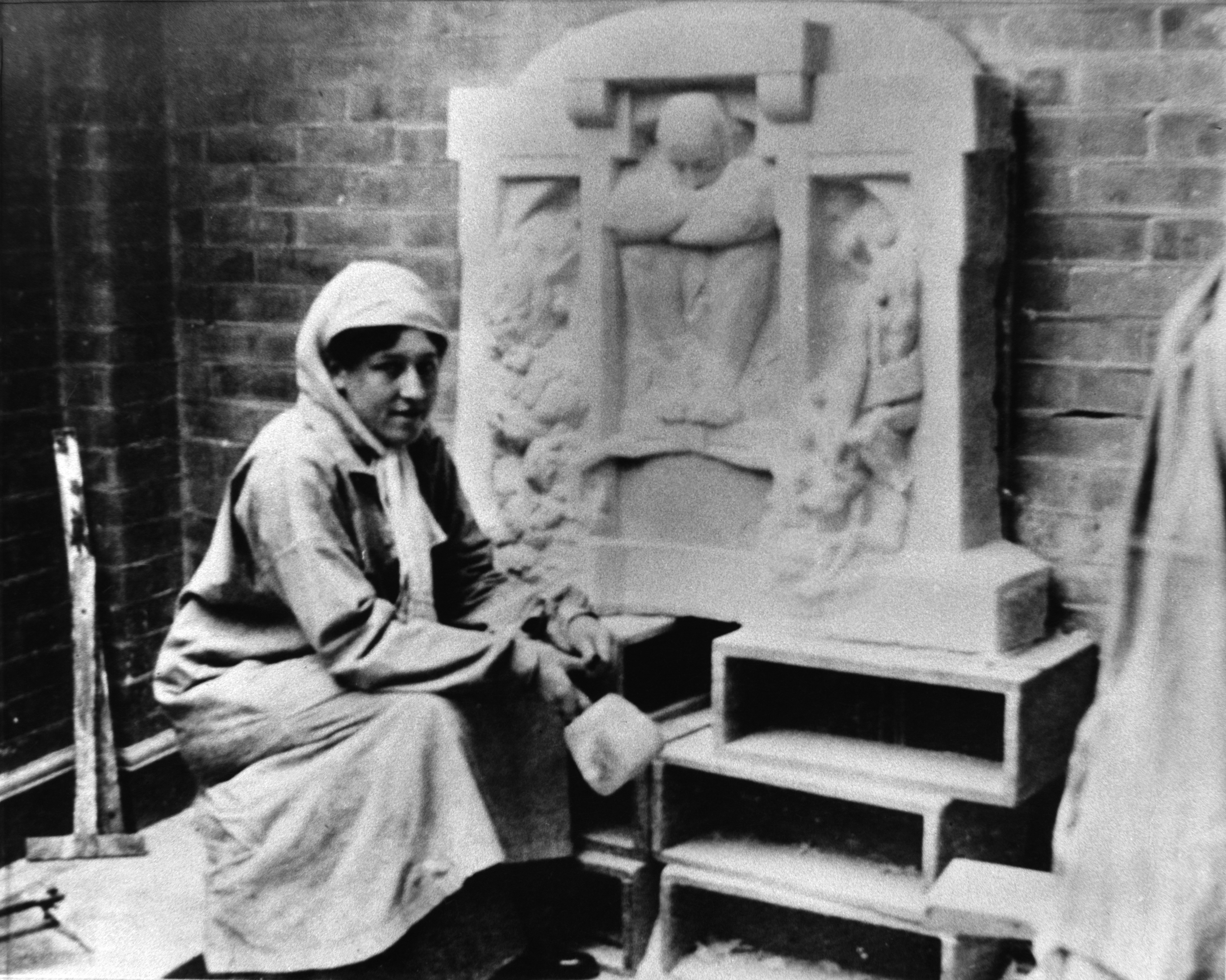 It was truly significant that Maltwood’s first major work Magna Mater was commissioned by Elbert and Alice Hubbard for the Roycroft Workshops. Elbert had met William Morris in the 1880s and became a forceful crusader for Arts and Crafts design in the American home. In addition to producing handmade objects in copper, leather and wood the Roycroft community published Elbert’s writings, which had a massive circulation. The layers of intellectual content in Maltwood’s sculptural work generally open her work to a wide range of interpretation. In a letter, Roycrofter Alice Hubbard wrote that Magna Mater embodied the ideals of the women’s movement:

The new woman will be free. Then she will be whatever her judgment wants her to be… I have paid the tribute of tears to your Magna Mater – … I know what it means. It hushes me into silence and I bow my head to the Truth it expresses, the truth I experience. 5

Maltwood’s artistic intent might be further illuminated by a clipping from 1911 in her personal papers, which praises the sculpture as a work expressing the “elemental truth of motherhood… in the universal sense.”The author of the article asks readers to “pay homage” to the artist’s “poem in stone” but goes on to ask, “Are women really sitting at the feet of man waiting to applaud their poem? Are they not rather making their own poems, using their own god-like gifts of Creation in many ways? Not as Mothers only, but as Makers, women are coming into their own.” 6 Maltwood wrote on the clipping “Votes for Women” and this notation may reflect her sympathies with the women’s movement. 7 Her affinity for this particular piece is nonetheless evident in that she made a second stone version for Chilton Priory, her home in Somerset, where it is still installed today, and an electrotype now in the university collection.

Another work which attracted critical attention was Maltwood’s plaster maquette Primeval Canada Awakening to Her Destiny. A smaller carved stone bust entitled Head of Canada was exhibited at the Arts and Crafts Society in the Grosvenor Gallery in 1912 and at the London Salon in 1913. The Standard newspaper’s critic described the anticipated finished work:

The conception is that of a colossal woman, clothed in pine forests, with her head upturned to the skies and her hands at her sides protecting symbolic figures of moose and buffalo which rest on the rectangular blocks on the base of the monument. Between the figure’s feet is a bearded figure, small in proportion, of a pioneer backwoodsman with an axe, … arm outstretched as if in worship of Canada rising before and above him… the suggestion might be that of a mountain coming to life before the impassioned gaze of the pioneer.  8

In 1914 the art critic of The Observer wrote: “[it] promises to be one of the most remarkable works produced by an English sculptor.” 9 Maltwood reportedly planned to erect the finished work in Canada. While the overall composition of this piece is complex, the profile calls to mind the facial features and pose of Pre-Raphaelite artist Dante Gabriel Rosetti’s Beata Beatrix. This is one of his most recognized works, and it may well have been an inspiration to Maltwood. In an 1873 letter to his friend William Graham, Rossetti said he intended the painting “not as a representation of the incident of the death of Beatrice, but as an ideal of the subject, symbolized by a trance or sudden spiritual transfiguration.” 10 87The spiritual undertones of the painting would have appealed to Maltwood’s sensibilities, and it is not unlikely that she would have known of this work and its intent.

Maltwood’s interest in the transcendental power of sculpture is explained in the only surviving piece of her writing on art, which describes the artist as an “idol maker,” who reveals deep inner truths and serves as an inspiration to those seeking enlightenment:

The trade of “idol making” has almost died out in Europe, to the detriment of sculpture. Looked at from the artistic and historical standpoint, if not from the religious, this is a loss to generations to follow… Is it not possible to breathe aspiration or inspiration into our sculpture instead of grossness and soulless mechanism? Suffering may be there that is inevitable in a changing world, but it is possible to become perfect through suffering… That should be the ‘metier’ of sculpture. The idol maker should suggest higher and hidden values that we are moved by aesthetically and from which we receive definite inspiration.  11

This notion repeats throughout her oeuvre, even when she could no longer sculpt in stone and turned to drawing in the late 1930s. Her Treetops sketches show scenes of nature in and around Victoria, revealing massive figures and architectural forms emerging from the landscape and tree forms that seem to be filled with life energy. 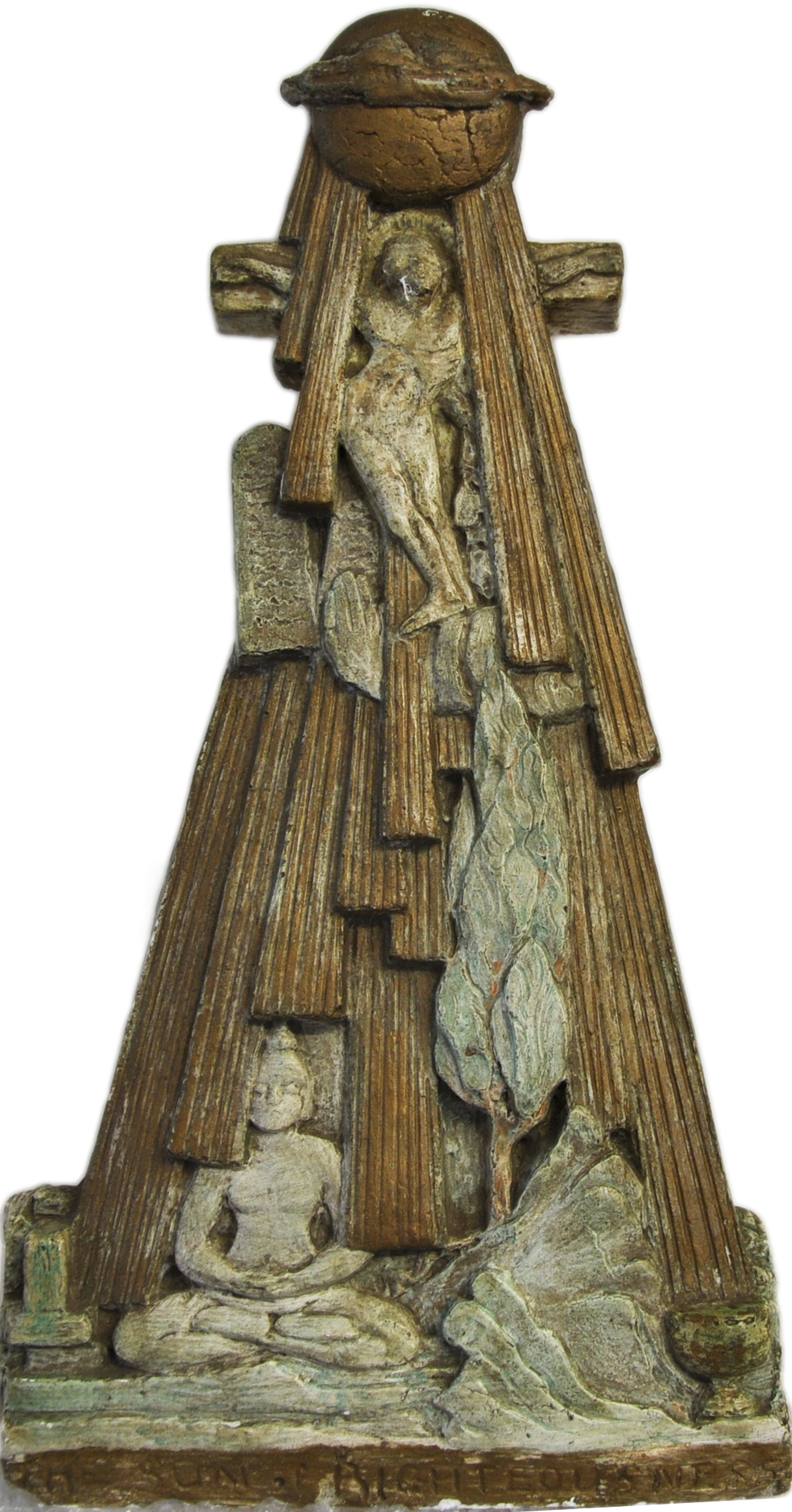 The final example The Sun of Righteousness (c. 1935-1945) is a painted plaster maquette and illustrates her later work. The title of the piece references an Old Testament passage, this one prophesizing the Day of Judgment: “But unto you that fear My name shall the Sun of Righteousness arise with healing in His wings; and ye shall go forth and grow up as calves from the stall.” The piece includes images of both Christ and the Buddha, illustrating Maltwood’s increased interest in Eastern religions and theosophy by this time. Theosophy was based on the movement founded in 1875 by Helena Petronova Blavatsky (1831-1891) and asserts that all of the great religions of the world originated from the same supreme source and express a universal shared truth. 12 Maltwood’s biographer Rosemary Brown describes her post-war work as generally possessing a “Mystical Asiatic spirit… in an attempt to offer the spectator a new relation to life and its deepest meanings. ” 13