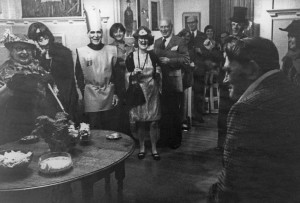 In the 1950s Czech sculptor Jan Zach arrived in Victoria and was one of the few artists teaching modern art trends. He was known for fostering individual styles in his students whom included Robert de Castro and Elza Mayhew. Similarly, German emigré Herbert Siebner was a catalyst for the Point Group, comprised of twelve artists who exhibited at a Danish furniture store on Fort Street until 1962. More commercial art galleries opened throughout the 1960s and acted as venues for both exhibitions and social gatherings.

Established and new artists were drawn to Victoria for reasons including the environment, West Coast lifestyle, opportunities to teach, and relative newness of a modern art scene that allowed artists to freely create. In 1961, renowned artist Maxwell Bates came to Victoria and brought resident and newcomer artists together. He suggested a new group be formed in 1971, The Society of Limners. The grouped was named after traveling journeymen sign painters and artists of the middle ages. The members were a variety of painters, sculptors, printmakers, and ceramists – none adhering to a specific manifesto or subject. They became well known for being Victoria’s preeminent art group and were a culmination of a decade of collegial collaboration, interesting parties, and exchange while fostering their own individual styles. 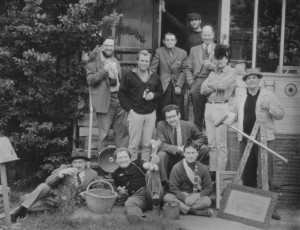