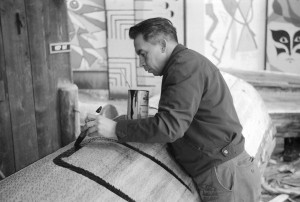 What has been described as a “revival” in Northwest Coast First Nations art began in the 1950s. Previously, cultural expression was tragically suppressed due to the potlatch ban and other assimilative legislation in Canada. Finally, revisions to the Indian Act allowed Indigenous people to incorporate their traditions into contemporary society. In 1951, the Royal Commission on National Development in the Arts, Letters and Sciences recommended preserving and publishing First Nations designs. Funds allocated for artists, museums, galleries, and events, such as the Indian Pavilion at Expo ’67, brought artists together from across the country to communicate their distinct identities on national and international stages.

In Victoria, the Thunderbird Park carving program was active since 1941. Under the leadership of curator Wilson Duff, nineteenth century poles were retrieved during museum expeditions across BC and replicated at Thunderbird Park to record and preserve their designs for ethnographic study. With the critical involvement of numerous Indigenous artists this program facilitated a transmission of traditional art from older to younger generations and was open to the public. Interestingly, a discursive shift from focusing on traditional to contemporary Indigenous art emerged. 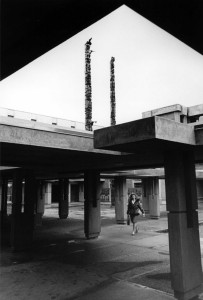 The 1967 centennial landmark exhibition Arts of the Raven: Masterworks of the Northwest Coast at the Vancouver Art Gallery opened the way for exhibitions that recognized First Nations material culture in a fine art context as opposed to an ethnographic one. The exhibition was part of a broader movement to increase public awareness and interest in Indigenous culture while developing a contemporary Northwest Coast First Nations art market in contrast to the existing ‘tourist trade’. Serigraphy (silkscreen printmaking) and limited edition prints became a new medium for Indigenous artists to provide affordable fine art pieces to a wider audience in Victoria as well as nationally.

Links of interest: About the Royal Commission on National Development in the Arts, Letters and Sciences; Thunderbird Park; About the Indian Act