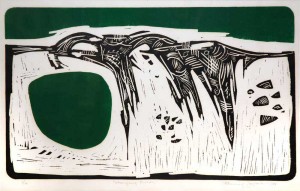 Danish-born Jorgensen studied commercial art with Herbert Siebner when he first arrived in Victoria in the late 1950s. By the 60s, he was working in painting, sculpture and printmaking. University of Victoria Visual Arts professor Patricia Martin Bates described him as, “a consummate designer, one of the truly finest multi-faceted serigraphic [silkscreen] artists in the country.”1 He was associated with The Point Group and became an influential and respected artist in the community. He excelled as a teacher in many of Victoria’s art schools and also co-founded the Metchosin International Summer School of the Arts in 1984.