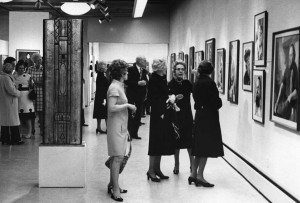 The 1960s marked the emergence of a vibrant contemporary art scene in Victoria. Events such as the BC centennial celebrations and Expo ’67 foregrounded regional and national artistic achievements, while the newly formed Canada Council for the Arts brought a source of financial support to practicing artists. The politically charged spirit of the time, born out of war experiences and social justice movements, generated a desire for change and experimentation. This included artistic movements toward anti-hierarchical approaches inclusive of applied and non-Western art.

A cultural resurgence in Indigenous art on the Northwest Coast in the 1960s was partly supported by the Provincial Museum’s Thunderbird Park pole restoration program. Increased cultural awareness and the revitalization of downtown Victoria created an opportunistic atmosphere. The city’s first public art gallery, the Art Gallery of Greater Victoria was established in 1951. The next decade saw the opening of a number of commercial galleries such as Bente Rehm’s Pandora’s Box, Nita Forrest’s Print Gallery, and Tony Hunt‘s Arts of the Raven Gallery. These ventures contributed to an appetite and openness toward contemporary art. 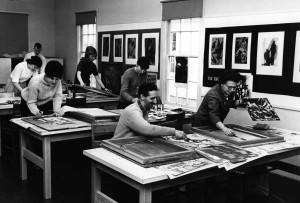 Making a Scene highlights a selection of artists who contributed significantly to the arts in Victoria at this time. Their work is drawn from the University’s permanent collection to illustrate the emerging practices of artists in this region, many of them newcomers to the city. The opening of the University’s Gordon Head campus in 1964 drew scholars and artists from Europe and the United States who brought new ideas to BC’s capital. Generally the local arts community was much closer-knit than the larger centres of Vancouver and Seattle. Personal connections, mentorships and social groups allowed for more experimentation and individualized expressions among Victoria’s artists.