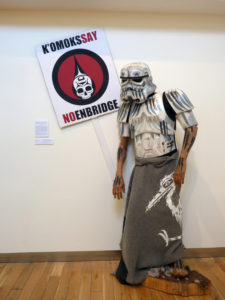 Defender
2014
Acrylic on plastic, mixed media
On loan from the artist

I don’t really have a strong activist mindset, but I know when something is really really wrong. I see hereditary chiefs on the news standing together against this pipeline. I respect them and honour them by doing my little part to support our traditional leaders. I just want to let them know that the Kwakwa̱ka̱’wakw here in the south stand together with them shoulder to shoulder. That river that flows through their village connects with the inlet in front of the next and that inlet’s waters run right along the coast to our territory, as well. We’re in this together!

Also: In case the message isn’t clear: Say “No” to the Enbridge pipeline that purports to travel through unceded First Nations territory! Black represents the oil, red represents the blood of our people…. 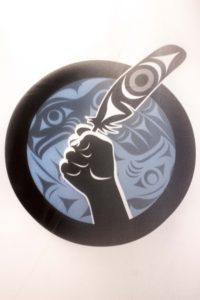