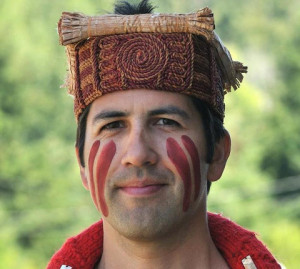 Andy Everson was born in Comox, British Columbia, Canada. Everson is a self-taught artist, who combines traditional design with modern technology and subject matter. He is widely known for his prints depicting Star Wars characters in Northern style.

Everson honours and practices the traditions of both the K’ómoks and Kwakwa̱ka̱’wakw First Nations. He was named Na̱gedzi after his grandfather, the late Chief Andy Frank of the K’ómoks First Nation. He was also honoured with the ‘Na̱mg̱is T̓sit̓sa̱ł’walag̱a̱me’ name of Ḵ̓wa̱mxa̱laga̱lis I’nis. Beyond his own artistic practice, Everson sings and dances with several traditional dance groups: the Le-La-La Dancers, the Gwa’wina Dancers and the K’umugwe Dancers. Everson also holds a Master’s degree in Anthropology from the University of British Columbia.

See Everson’s artwork in Out of the Frame here.