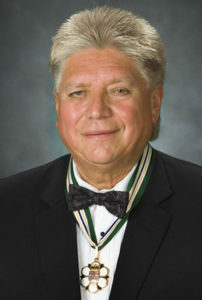 Credit: Order of BC

Charles Elliott (Temosen) is a member of the Tsartlip First Nation, and was born, raised, and still resides in W̱SANEĆ (Saanich) on southern Vancouver Island, British Columbia. Elliott is a Master Carver and fine artist, who has contributed significantly to the current practice of Coast Salish art and design. He began his artistic training as a child, carving model canoes with direction from his father, mother and uncles. Elliott also paints and has created many serigraph prints. He has a vast body of work, including the Queen’s Baton for the 15th Commonwealth Games and a talking stick for Nelson Mandela.

Elliott has mentored many emerging artists and contributes actively to his community. He serves as a volunteer on the Parent Advisory Committee of the L̵ÁU,WELṈEW̱ Tribal School and as one of the primary organizers and curators of the annual Coast Salish art exhibition in Saanich. For his leadership in the arts and in his community, Elliott was appointed to the Order of British Columbia in 2005.

See Elliott’s artwork in Out of the Frame here.