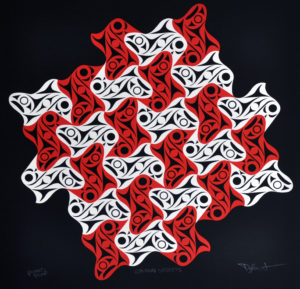 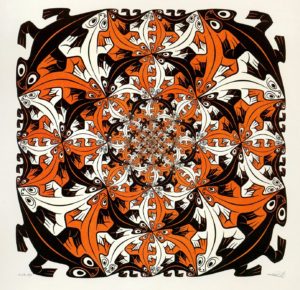 This print represents the overcrowding of salmon in the spirit world. My great-grandmother, Lavina, remembered days when you could walk across Zeballos River on the backs of the salmon. However, due to global warming and other environmental disasters, the number of salmon has dropped considerably over the past decades.

Something must be done to help bring this sacred fish back to the physical world or the results could be devastating to us, the people of the salmon.

This design was inspired by M.C. Escher and the colours of Don Yeomans. 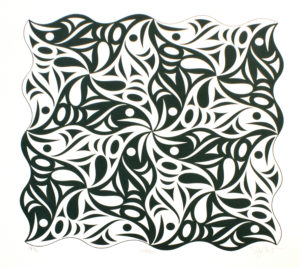 Ripples
2013
Serigraph on paper
On loan from the artist 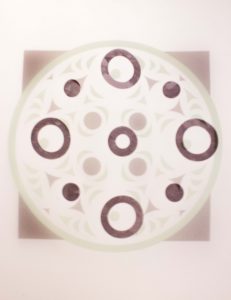 The title Pointing at the Moon is borrowed from an ancient Buddhist metaphor found in The Surangama Sutra. The text uses a man pointing at the moon to metaphorically communicate the difference between intellectual and experiential knowledge. In the analogy, the moon represents spiritual awakening, and the finger represents the Buddhist scripture. By illustrating that, if one fixates on the finger, he/she will never see the moon – the metaphor indicates that if one becomes fixated on scripture rather than spiritual practice, he/she will never achieve an awakening. In my design, I have depicted the moon breaking free from a frame; this symbolizes the importance of a spiritual practice transcending the superficial study of sacred texts.