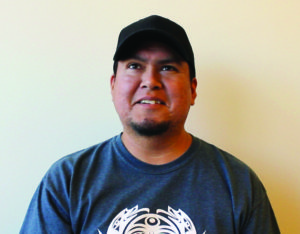 lessLIE is the decolonized name of Leslie Robert Sam, a Coast Salish artist. He works in a variety of media, but is best known for his serigraph prints. His artwork draws on traditional iconographic elements and often adds contemporary titles or text infused with humour and irony. While working on his undergraduate degree in 1995, lessLIE began studying Coast Salish art, and he continued this focus with graduate work at the University of Victoria. He holds a Bachelor of Arts degree in First Nations Studies from Malaspina University College. He has recently begun working on curatorial projects, including guest curating, writing, and lectures. His work has been exhibited both nationally and internationally.

See lessLIE’s artwork in Out of the Frame here.