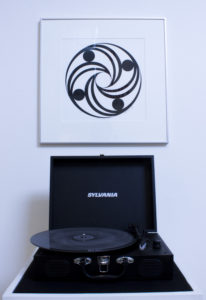 Salish artists have drawn much inspiration from the designs and artistic legacy of spindle whorls used in the production of wool for weaving. This print created for Out of the Frame takes up this visual history in its formal presentation of the circle shape, and here the abstract design contributes to the illusion of a spinning motion of the object as it was traditionally used. To explore the relationship between form and motion, I sandblasted the print design onto a record album sized glass disk that spins on a modern turntable. This installation specifically references the song “Spin the Black Circle” by the band Pearl Jam from their 1994 album Vitology. The official video for the song depicts graphic black and white images of a record player and close up shots of a record spinning while the needle on the machine travels in between the grooves of the tracks on the disk. 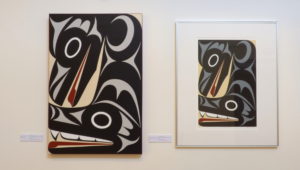 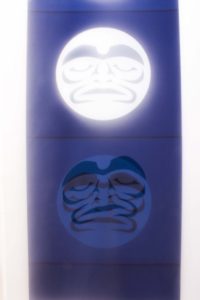