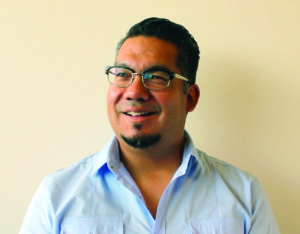 Maynard Johnny Jr. was born in Campbell River, B.C. and now lives in Chemainus, B.C. His mother is from Cape Mudge on Quadra Island and his father is from Penelekut Island. Johnny has been working as an artist since the age of seventeen and is primarily self-taught. He is particularly inspired by the work of Robert Davidson, Mark Henderson, and the late Art Thompson. Johnny specializes in several media, including painting and graphic art, woodcarving, and silver and gold jewelery design.

His work has been featured in solo and group exhibitions at the Douglas Reynolds Gallery (Vancouver, B.C.), Alcheringa Gallery (Victoria, B.C.), the Art Gallery of Greater Victoria (Victoria, B.C.), and the Museum of Art and Design (New York, N.Y.).

Johnny created an 8-foot by 3-foot salmon sculpture for the World Trade Center in New York, honouring those lost on 9/11. He continues to share his culture through his art and to experiment with new media.

See Johnny’s artwork in Out of the Frame here.