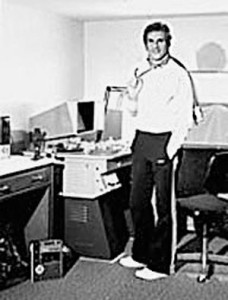 Karl next to a Steenbeck 16mm editing table

The Karl Spreitz Film Collection at the University of Victoria consists of more than 100 reels of 16mm film in various stages of production. Many of these films were produced by Spreitz in collaboration with other artists and friends such as Colin Browne, Vicky Husband, Anne Mayhew, Michael Morris and Herbert Siebner and are both personal and documentary in nature. Covering a period of more than three decades, the content of the films describe the working process of local artists, historic events, and political and environmental issues. The collection is of tremendous historic value both in terms of film production in British Columbia, subject matter, and as a partial record of Spreitz’s career. 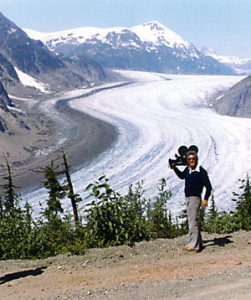 Karl location scouting for BC Film Commission in Stewart, BC.

All of the films were shot on 16mm film with a limited budget and resources.  Many of the films were produced in the 1970s, at the height of the “underground” film movement, which was characterized by experimentation and diverse forms of self-expression. The influence of this spirited time is evident in films such as Don’t and The Sightseer. During this period, the National Film Board was also supportive in the development and exploration of various areas of film, especially animation and documentaries.  Spreitz collaborated with many others in films for the British Columbia Provincial Museum; the Provincial Government Department of Travel Industry; CTV, CHEK and CBC television; and Beautiful British Columbia Magazine.

It is anticipated that more of the films in this collection will be digitized over time to facilitate access to this important body of work.