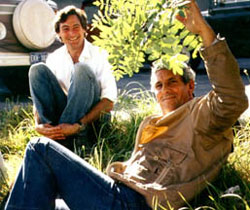 In my young life, and in the young lives of many others, Karl Spreitz has been the equivalent of a one-man art school. He’s a catalyst; a provocateur. He sizes up the moment before you know you’re in it. He always shows up with a gift—an antiquarian book, a clutch of engravings—and an improbable batch of stories and jokes, many of them told at his own expense, with a cast of characters drawn from the artists of Vancouver Island whose vanities and ambitions he catalogues with relish. His libraries are the Salvation Army and Goodwill stores. Tell Karl you’re interested in WWI trench warfare and he’ll show up with a volume of Apollinaire.

It was the early 1970s, and I was working on an LIP Grant at the B.C. Provincial Museum when I first met Karl. Somehow, the Display Dept. had hired me to paint walls and glue barnacle shells to the hull of the H.M.S. Discovery. I was writing poetry and running a little press at the time and had some sort of idea about presenting audio dramas in the Modern History Exhibit. Jean André suggested a film instead and introduced me to Karl. Thus began the happiest collaboration of my life. Karl taught me about light. I’m not sure I ever saw him use a light meter; he always knew exactly the right exposure. He’d spent years working as a news cameraman and was now living by his wits. We saw each other every day and telephoned each other every night to gossip and plan for the next morning.

These were glorious, stimulating days and our imaginations knew no boundaries…

Karl and Anne: Our Collaboration on the Time Markers film, about the making of Elza Mayhew’s Column of the Sea 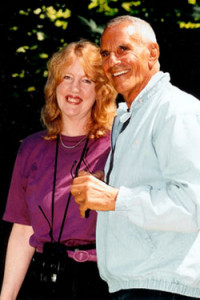 Written by Anne Mayhew
Writer and daughter of Elza Mayhew

There are few things in the world as invigorating and hilarious, life-altering, as collaborating with Karl Spreitz  –  on anything.

Karl became [sculptor] Elza Mayhew’s “photographer of record” in the 80s.  I had returned from a life in Montreal and Toronto, and Elza set us up to work on a film about the making of her monumental sculpture, Column of the Sea.  Earlier, in the 70s, she had arranged for Karl to film the actual casting of the sculpture at the Eugene Aluminum and Brass Foundry in Oregon, so the footage was sitting waiting to be used.

As Karl would say, that was “the begin.”

Somehow we managed to pull it off. There was little that didn’t happen to challenge us, even to a flood from the upstairs office running through the reels.

And the footage!  We had what we had, everything Karl took at the casting in 1972 – and no more.  We became brilliant at using bits and pieces.  There was nothing left on the floor, we used it all. And even then, more was magically pulled out of a hat.  (These were the days of actual film.)

After that, we played through project after project together.

It always went the same way:  The photographer respected the words; the writer wanted more pictures.  If space was tight, Karl immediately suggested reducing an image.  I immediately began cutting the text.