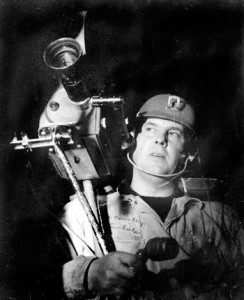 The following terms apply to16 mm film-making and follow the order in which films typically are produced and edited.

Camera Original:  The camera original is the film exposed in the camera and will remain the first and most important source for the image.

Sound Transfer: The sound track, recorded on magnetic 16mm film, would be cut in sync with the picture and then, in a final cut, married, and an answer print would be made.  The sound cutter cuts according to edge numbers on the film.

Answer Print: The answer print contains the picture and the sound to be projected and corrected. The first answer print usually needed colour corrections and exposure timing for under or over exposed scenes. At this point, the sound track still could be changed, rearranged, and another answer print made.

Out footage: Out footage is mostly camera original, which has not been printed, but contains important information that is not included in the final film. Out footage could also be found as a work print that ended up in the editor’s bin.

Splice: A method of joining two pieces of film so they can be projected as one continuous piece. There are two methods: the tape splice (usually used for editing), the cement splice (used for original material).

Married Print: This version includes sound and colour corrected answer print.   All components are married together in one film

Release Print: The final version of the film, made for distribution